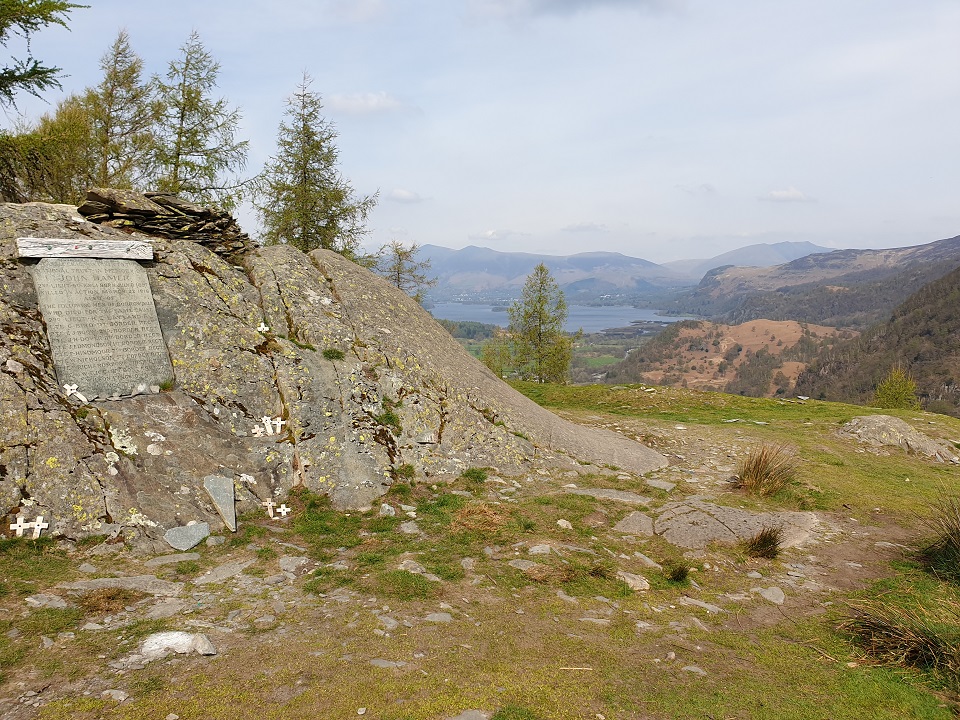 A beautiful  day saw us heading to Borrowdale for a relaxed wander up Castle Crag through the pretty, deciduous woodland with spring flowers and lots of birds busy in the warmth.  Rather than approach from Rosthwaite, we went for the adventurous option and took our shoes and socks off to wade across the river near the Bowderstone.  Castle Crag is the only fell on the list of Lakeland mountains under 1000ft, though what it lacks in altitude it more than makes up for in stature as its dominant, craggy presence in the ‘Jaws of Borrowdale’ makes it a visible sentinel from far to the North.

Significant slate quarrying and mining took place on Castle Crag and it bears the slate tips and excavation scars associated with that.  Most notably, it has the slate ‘cave’ on its North Eastern flank which was inhabited by Millican Dalton (1867-1947) for over 50 years.  Dalton, the so-called ‘Professor of Adventure’, gave up his job as an insurance clerk in London to live rough in the Lakes during summers; he survived by offering guiding to visitors and built rafts to paddle and sail down Derwentwater.

The photo shows the view North from the summit with the memorial plaque to the local war dead on the left.

If you’d enjoy Steve’s support for a day in the hills, or a half day like this one, please get in touch to discuss your needs: 07796 213817 & steve@stevebanksoutdoors.co.uk